Reaching as far back as the 1870s, the unrest in Europe and its borders comes to a tipping point as the Balkan War of 1912-1913 had again fanned the embers of ethnic rivalry.

Franz Ferdinand, the archduke of Austria-Hungary, and his wife are assassinated on 28th June 1914 in Sarajevo by the 19-year-old Gavrilo Princip, a member of  Young Bosnia and associated with members of the Black Hand, an ultra-nationalist Serbian group.

By 23 July 1914, Austria's patience was running out and they gave the Serbians an ultimatum!

This put the cat amongst the pigeons and was a fatal misjudgment by Austria.

Mutual Treaties and friendship will drag in the European powers Germany, France, Russia, and Great Britain.

Neutral powers like Belgium, the Netherlands, and Luxembourg, under a treaty, are being threatened.

On 28th July 1914, only a month since the Archduke’s assassination, Austria-Hungary with the support of Germany declared war on Serbia.

On 4th August 1914, German troops marched on France, taking a route through Belgium.

Britain had agreed to guarantee Belgium’s neutrality, and immediately declared war on Germany.

Meanwhile, for the locals in Clayton le Woods and Whittle le Woods, it has already been a tough few years, mill strikes, job losses, the bad weather hampering the farming of fruit and vegetables, and more.

But more hard times were to come...

The streets of Britain fill up with crowds gossiping and were reminiscent of the Boer War with the news of the Declaration of War.

Every part of life in Clayton le Woods and Whittle le Woods would be forever changed.

As men of all ages step forward, our communities spirit and patriotism will again be tested to the limit.

Energetic efforts are being put forward at Whittle le Woods to provide comfort for the soldiers at the front.  Six hundred garments, consisting of shirts, socks etc have been made by the Whittle le Woods and Clayton le Woods Sewing Guild for the Red Cross Society.

Nearly 500 garments have been made for Queen Mary's Needle-work Guild and the Belgians.

The good work is still being carried on.

Private William Tuson, of the Coldstream Guards, who was wounded at the battle of Aisne, has written to his relatives at Clayton le Woods from the Southern General Hospital, Plymouth. He was wounded by shrapnel in the thigh and described the two wounds as "two fine presents from the great William". The last five days at the front, he states, were " hell upon earth." The Germans were a lot of cowards, and plundered every village, and worse than that. When wounded he had part of his trousers blown away.  When he saw the enemy approaching, he fixed his bayonet and put it a few inches above the trenches. His gun was shot out of his hands. One shell dropped close to him but fortunately, it did not burst. "Talk about fireworks," he remarks, "Belle Vue was not in it."

Private Tuson states that after being wounded he and others were awaiting treatment from a doctor when the latter had his head blown off. As a result, Tuson did not receive attention for four days.

His socks had been constantly saturated in the trenches, and they had to be cut away with scissors.

As to tobacco, they could have got 2s, for a packet of woodbines.

Just as the local mills had spent the year trying to recover from the many strikes and idle machines (1913),  The start of hostilities means losing more staff to the war effort.

Disaster would strike again much closer to home as on Wednesday 14 October 1914, Kem Mill Printworks is discovered shortly after six o'clock to be on fire by Mr. A. J. Cunliffe, the principal who was at the time in the office.

About 160 men, (plus women and children?) are employed at the works, and as stated Clayton le Woods and Whittle le Woods will be hard hit by the disaster, the township not having recovered from the prolonged strike which took place at a mill last year.

For the past few weeks recruiting has proceeded satisfactorily at Whittle le Woods, the total number of enlistments being nearly 200.

The local harriers' club has suffered severely in consequence, and have for the time being suspended running for the season.

A meeting to further the efforts of recruiting was held the other evening. 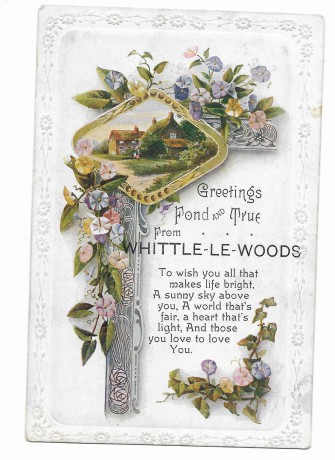 Postcard sent from Whittle le Woods to Chorley in September 1918

So Lizzie Darbyshire or her family must obviously have moved into the above address after the 1911 census. 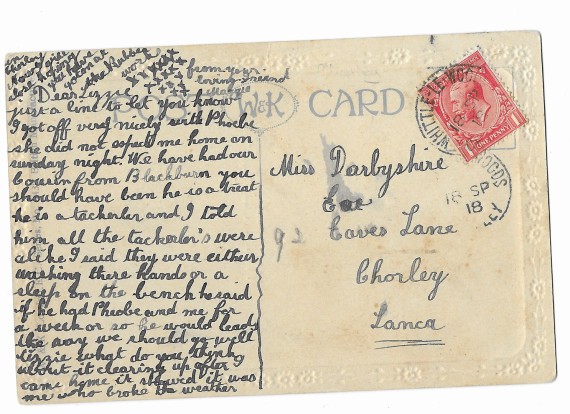 The Postcard reveals a

from her friend Maggie as of  the 18th September

No mention of the war! 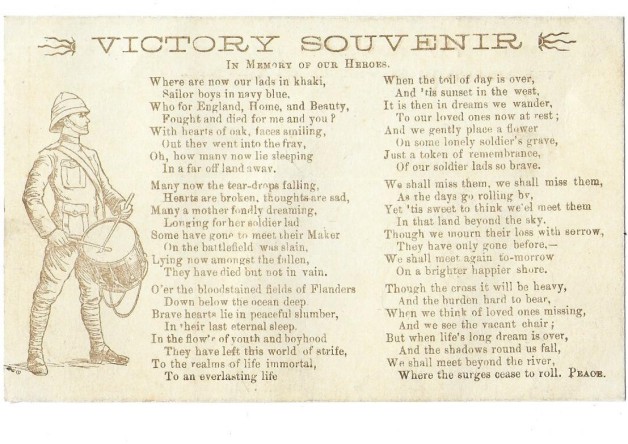 At the invitation of the Mayor and Mayoress of Blackburn (Alderman and Mrs. L Cotton), the

in the Parish Club, Whittle le Woods to a hotpot supper. There were 360 men present.

A concert was provided by Mr. Aspin's party from Blackburn. At the close, a cordial vote of thanks was accorded to Alderman and Mrs. Cotton on the motion of Mr. J.T. Little, seconded by Mr. James Houghton.