All the local men who served during WW and WW2 would receive medals, however, there are some who perfomed above and beyond

Those who Returned from Duty will also have won medals

In the UK, British Army Recipients of the Military Medal, 1914-1920 but no picture

Need to try and trace it

On the service medal and award roll, it's said he served with - 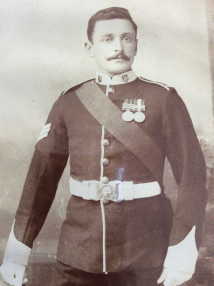 Elected to draw pension whilst serving as of 23 January 1919

Stationed away at Burtpore Barracks, Hants in 1911

Parents are David and Mary Waterhouse

Living at Rockleigh, Horns Road, Stroud, Glos. as of Discharge

Awarded Medal for Long Service and Good Conduct in 1914

A bar clasp inscribed "5 Aug. to 22 Nov. 1914" was given to all those who qualified for the 1914 Star and who served under fire. Since the same ribbon is used with the 1914-15 Star, holders of the 1914 Star were permitted to wear a small silver rosette on their ribbon when the decoration itself is not worn. On the medal index cards this is usually noted as the "Clasp and Roses" or "C&R" .It was necessary to apply for the issue of the clasp.

For good service during attack on enemy to Venterdorp on 23 May 1901?